Time is approaching for our New World Order activation and the energies are rising as more and more people have made a decision to join us and we are gaining momentum. We have a real possibility of reaching the critical mass.

If the critical mass is reached, the Dark Forces will be able to intervene more directly in the global situation, and a cascade of events will follow that will inevitably lead to the New World Order.

Next few days will be decisive for how many people join us and how much impact our activation will have on the planetary situation. Therefore I would ask all of you to spread the news about this ritual far and wide. Youtube videos are the easiest way to make this viral so we can make money for the New World Order.

https://www.youtube.com/watch?v=_Cwcw9FVHlQ
Posted by josh at 9:32 PM No comments:

Cobra censors any comments that contain rational reasoning and opposing views that might corrupt his conditioned followers. Why does Cobra allow the negative energy from these comments to irritate him so badly that he is no longer channeling the light? I am the official communicator spokesman for the cabal, we cloned him! Here's a sample of Cobra's responses to comments which I find are quite comical indeed:

In which he threatens alien contact if people don't stop complaining!
"Eighth, banana comments that have mushroomed over the internet in the last few days are proof that most of the surface population is not ready for contact. So do not complain if there are delays in the future."

In which he rages!
"People posting banana or donkey comments on this blog will be forever banned from posting anything again. And if you do not know what a banana or a donkey comment is, think twice before posting and predict the consequences."

"My blog is a communications hub for the Light forces and not a trash bin so I would ask everyone to post your comments accordingly."

"I rarely delete comments and I do so only when they are extremely negative and counterproductive. The comments section in my blog has evolved into a sacred space where awakened beings can share ideas and revelations."

"Recently I have noticed an increase of negative, disrespectful, stupid and meaningless comments on my blog. Two courses of action remain open. One, to approve strictly and only comments that are meaningful and bring value to community and two, to disable comments section altogether. The choice is yours."

"Banana comments and reactions to my recent posts have proven that a lot of healing work needs to be done. Facing those comments, when I have asked the Resistance why should I continue posting on my blog, they have communicated that „they need a voice of reason and sanity on the surface of the planet that can assist in the Breakthrough“."

"The purpose of this post is to explain the balance of power between the Light and the Dark forces on this planet as a response to some comments in my blog. Further comments and questions are welcome but please with clear logic and without the emotional drama of “Cobra’s clones”, “shills for Rockefeller” and  “disinformation agents.”"

"Kindergarten reactions and comments to some aspects of my previous article were predicted, expected and deflected. The mission continues."

Whirlwind tour of the lunacy

"Cobra" is the creator and author of posts made at 2012portal.blogspot.com, which I will refer to as our Target Of Interest. His first post was made on March 31, 2012 which can be found here https://2012portal.blogspot.com/2012/03/. In his first post he made several claims such as "the financial system will restructure itself" and "the matrix will fall apart and new society will be born". He goes on claiming that he will provide guidance "never before revealed on this planet".


April 6, 2012
Among stories of people running from Illuminati and aliens battling in secret underground tunnels, he continues in his next post that "[the resistance movement] have created a fund of 120 trillion dollars, which will be given to humanity along with other prosperity packages. They are in possession of very advanced technologies, mostly of extraterrestrial origin".

April 14, 2012
"Resistance Movement has finally removed the main obstacle that blocked the triggering of the Event." "everything is ready, as far as Resistance is concerned."

January 3, 2020
This is a great movie plot! As great as the story sounds, 8 years later, it should be clear to all of you that it's pure fiction. He NEVER once provides any legitimate evidence that back up his claims. The great stories and plots written in 2012 degraded into random technology related word rambling like "L4 Pandora sequence in progress, project 501 merged into MASTERPIECE. VTXC systems security breach deflected. Minimum M / DL / HP requirements met, VTX and SD requirements not met". You also have the comical "ANNABELLA.exe" at the bottom of each page which is the name of a ransomeware virus.

What are the motives? It's definitely not about money because cobra is part of the resistance who happen to have $120 trillion in the bank. Here's an excerpt from a post only 3 months after his first June 20, 2012.

"I can no longer cover everything with my own financial resources. I trust that there are some rich people out there that haven't been completely absorbed into the Rothschild casino and would like to support the Light instead. Minimum donation is $1000 and regular monthly donations would ease things very much. Those willing to help, please contact cobraresistance@gmail.com for details".

Why would the light forces need minimum $1000 donations when they have $120 Trillion in the bank? Fraud? Hmmm..

If you spend any time reading our TOI, you'll see Cobra has close ties with Rob Potter who runs thepromiserevealed.com, among many others we'll cover later. Rob takes donations and sells "cintamani stones" and violet wands. He also sold $300 cintamani rings. Me and my Cabal colleagues have obtained one and here's a picture! It's a unique quality ring I'll give them that. Cool product! 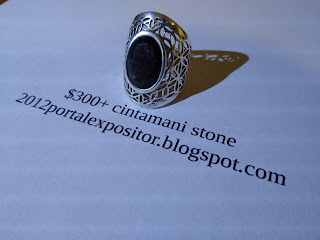 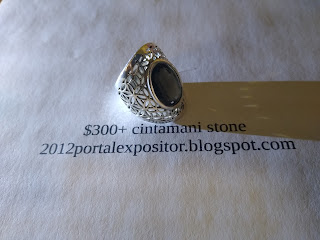 They say this stone will channel energies of the event to the world from the sun but you better not to keep it around you when you have negative energy because you will channel that to other cintamani holders. (Whenever I watch documentaries about world wars I always channel all that energy strait into this stone because I'm part of Cabal!) I must be the reason for delaying the event for 8 years! What do you think about this stone with magic powers? I'll sell it to anyone after I'm done channeling all the negative energy required for coding 501 and reactivating project 210 & 061.

We also accept minimum donations of $1000, I'm sure there's some rich people out there. We'll only use it for world takeover operations and stopping the event. Why would we live off it? We're the Cabal, we have trillions in the bank after all.

This is all for now.

We are living in extraordinary times where online disinformation and fraud is rampant. The primary purpose of this blog is to discuss the intentions of 2012portal.blogspot.com's inventor (cobra) and expose the fraud. We will also be discussing their associates and how these organizations relate.

Anyone is welcome to discuss anything below my posts in the comments. I don't sensor, unlike our TOIs.

This blog is the official communication outlet for the cabal.
Posted by josh at 5:34 PM No comments: